My needs for syncing might be different from yours. I am not interested in syncing data to my iPad. It is too old to be useful and I don’t use it much. I need to sync some data to the iPhone. Drafts is the central player in that exercise. Drafts uses iCloud to sync data. It has been reliable and efficient.

The main focus is on syncing my Dropbox folder between the iMac and the Air. That is all I need. Dropbox has become a memory hog and has a ton of features, which I don’t use.

These are the files which are in my Dropbox folder:

Came across an article on An Update on SyncThing - The Tao of Mac.

Syncthing is described by the developers as:

Syncthing is a continuous file synchronization program. It synchronizes files between two or more computers in real time, safely protected from prying eyes. Your data is your data alone and you deserve to choose where it is stored, whether it is shared with some third party, and how it’s transmitted over the internet.

I realized that there were two folders that I would like to have synced between the iMac and the Air. The Dropbox folder and the fonts folder. That is what I set up.

This is how it looks on the iMac.

Syncthing on the iMac

This is how it looks on the Air. 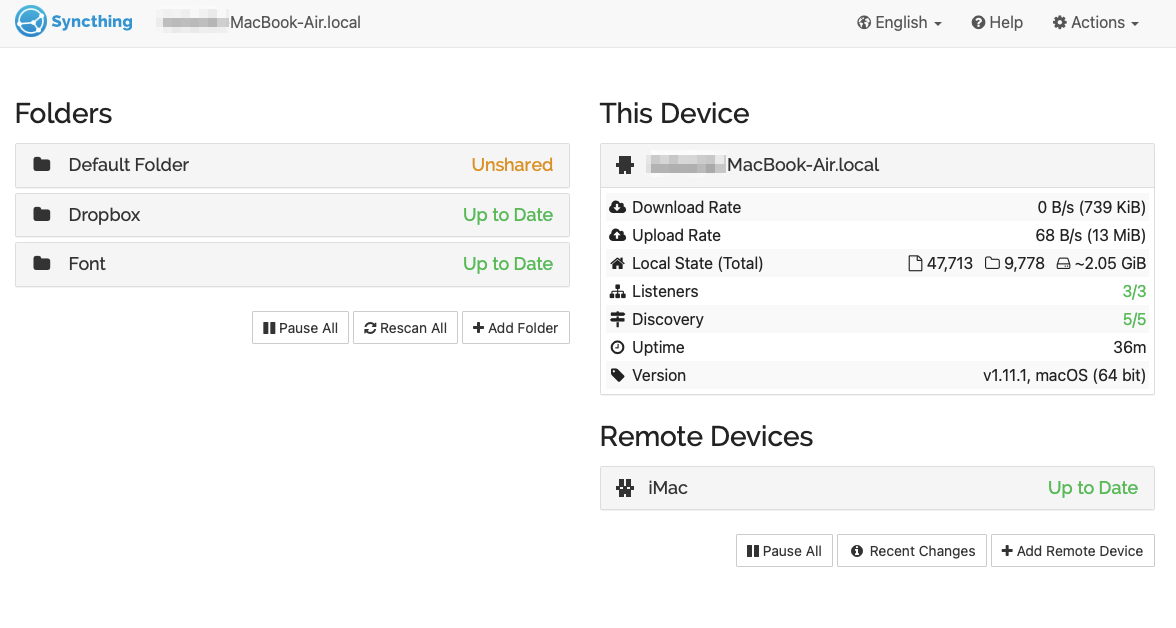 Syncthing on the Air

It continuously syncs the two folders to each other. The fonts folder doesn’t see much action but the Dropbox folder does. I have had the occasional sync conflict, but it gives me the conflicted file and the original and I can see which file was the latest one and what the conflict was all about and decide whether I need to merge the contents or get rid of one of them. More often than not, it required me to get rid of one of the files.

I am happy with the solution. It works. Does its job and I don’t have Dropbox eating up memory all the time. I launch Dropbox once a day and quit it when it is done syncing.

Note: I came across Maestral: Open-source Dropbox client for macOS and Linux, but have not tried it. This is another alternative to using Dropbox.

Part Three of My Battles with Emacs The experiment is over. I quit Emacs. The short version is the inability to trust simple things like copy and paste. I copy something from Safari